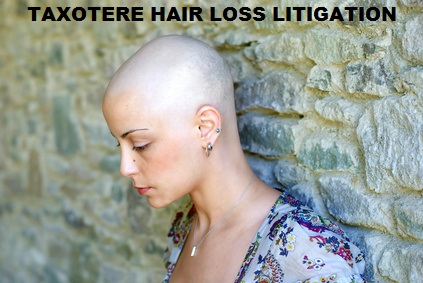 On November 17, 2016, the Judge handling the Taxotere (Docetaxel) Products Liability Litigation (MDL 2740) issued Pretrial Order No. 2 appointing counsel as Plaintiffs’ Liaison Counsel, Defendants’ Liaison Counsel and to the Plaintiffs’ Steering Committee. All appointments are for a 1 year term beginning immediately until January 1, 2018. Applications for the subsequent term must be submitted no later than November 15, 2017.

The Taxotere lawsuits allege that Taxotere’s manufacturers knew or should have known that the rate of permanent hair loss (alopecia) related to Taxotere was far greater than with other products available to treat the same condition. Yet, through its publications and marketing material, the drug companies allegedly misled the patients, the public, and the medical community to believe that, as with other chemotherapy drugs, patients’ hair would grow back. For example, one breast cancer survivor from Ohio, Hattie Carson, decided to take on Sanofi in Ohio Federal Court. According to her lawsuit, Ms. Carson underwent a core biopsy in April 2004 of her right breast after receiving abnormal results from a routine mammogram. The biopsy demonstrated an infiltrating ductal carcinoma, nuclear grade 3, and a ducal carcinoma, solid type with microcalcification in her right breast. After a lumpectomy and sentinel node biopsy were performed on her right breast, Ms. Carson met with her oncologist to discuss further treatment. Ms. Carson alleged that neither she nor her treating healthcare providers were aware of or informed by manufacturer, Sanofi, that disfiguring permanent alopecia could occur following treatment with Taxotere.  She underwent chemotherapy with Taxotere and suffered and continues to suffer from disfiguring permanent hair loss.

The Taxotere lawsuits also allege that contrary to the manufacturer’s claims of superior efficacy, post market surveillance has shown that the more potent and more toxic Taxotere does not in fact offer increased efficacy or benefits over other similar drugs, as the manufacturer has claimed and advertised.

On October 3, 2016, the U.S. District Court for the Eastern District of Louisiana consented to assignment of the actions alleging that the chemotherapy drug, Taxotere, can cause permanent hair loss, particularly in those being treated for breast cancer, for coordinated or consolidated pretrial proceedings. United States District Judge Kurt D. Engelhardt is assigned to the litigation.

Attorney Pamela A. Borgess, the founder of Borgess Law, LLC, is an experienced trial attorney who focuses on civil litigation, including defective medical drugs/devices cases. For more information about the Taxotere lawsuits or to discuss a potential claim, contact Borgess Law at (567) 455-5955 or toll-free at (844) LAW-9144. You can also contact Borgess Law by submitting an online inquiry. Borgess Law never charges for initial consultations.